Amalgamated Life Insurance Company, a leading provider of comprehensive insurance solutions, and the flagship company of the Amalgamated Family of Companies, announced today that its former President and Chief Executive Officer David J. Walsh has retired and will be succeeded in the role by Paul Mallen, who previously held the title of Executive Vice President and Chief Financial Officer. Walsh, who served in the organization’s top role since January 2008, leaves behind a legacy that crosses over several areas of operations starting with the company’s successful recruitment and development of, in his words, “a first class team devoted to providing excellent products and services.” He also is credited with driving Amalgamated’s continued growth and profitability.

Speaking on behalf of the Amalgamated Life Insurance Company Board, Chair Lynne Fox stated, “We thank Dave for his decade of outstanding leadership and success. Paul was a key part of that success. The Board unanimously elected Paul to succeed Dave as our new President and CEO. He has our full support and we are delighted that he will be leading us in the coming years.”

“With the help of a great management team and the backing of our Board, I can look back at my 10 year tenure with Amalgamated and see that we’ve accomplished a great deal,” said Walsh. “Through a well-conceived and implemented reorganization, the establishment and adherence to best in class customer service, and the expansion of both our product lines and our national footprint, Amalgamated Life has attained a new level of stature within the industry and the markets we serve.”

When asked about his successor, Walsh noted that he is going to be 69 this year and his retirement and the transition of leadership to Mallen has been in development for over 18 months.

“Paul has been the Chief Financial Officer of the company for the past 12 years,” said Walsh. “During that time, he has proven himself as a focused and competent leader with vision, technical expertise, and superior values and character. He is ready to lead company and I am confident, he will do an excellent job.”

Since joining Amalgamated in 2005, Mallen has held responsibility over multiple areas of operation. According to Mallen, “As CFO, I was involved in all aspects of the business; not only for the finance function, but also had the IT, underwriting, insurance operations and facilities units reporting to me. Additionally, I worked closely with sales and other business units and was significantly involved with the company’s strategic planning.”

In addition to his direct involvement across broad operational areas preparing him well for his new leadership role, Mallen has 30 years of experience across a wide range of industries and in various corporate finance activities, including: transaction advisory services, capital structuring, and credit and financial analysis. His expertise and experience also encompass operations, accounting and auditing, as well as SEC regulatory compliance and reporting.

Prior to joining Amalgamated, he held senior level positions with other consulting and financial services firms. He was a Managing Director at FTI Consulting and a Senior Manager at Deloitte, where he led numerous teams as a merger and acquisitions specialist. His career also included his role with Citibank in the Acquisition Finance and Global Media and Communications Commercial Banking Groups.

He noted that his initial goals as President and CEO will be to improve on and continue providing best in class service, along with developing new strategic partnerships and expanding the organization’s product lines and markets.

As for Walsh, his retirement will be anything but retiring. He plans to finish his PhD and teach at the university level. His “retirement” also will include his continuing to teach scuba diving and emergency first response courses, as well as traveling.

“Most importantly,” Walsh added, “I will be spending more time with family and friends, particularly our three grandchildren. “And, I will always be available to help the company and its people in any way I can to add value.” 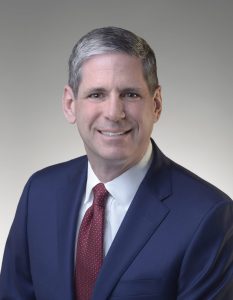 Founded in 1943, Amalgamated Life Insurance Company has since grown into a leading provider of comprehensive insurance solutions operating in all 50 states and the District of Columbia. The Company provides competitive group products including life, AD&D, disability and medical stop loss, as well as voluntary products such as whole life, disability, accident and critical illness, among others. Since 1975, Amalgamated Life has consistently earned the “A” (Excellent) Rating from A.M. Best Company attesting to its strong fiscal position. The company is a member of the Amalgamated Family of Companies which also includes: Amalgamated Agency, a property and casualty brokerage; AliCare, a third-party administrator; AliCare Medical Management, a medical cost management firm; and AliGraphics, a full-service printing and graphics firm. For more information, visit: www.amalgamatedlife.com

In the past few weeks there have been numerous restrictions placed on businesses throughout the United States. Many states and localities across the country have enacted temporary restrictions on non-essential business operations, requiring millions of workers to stay home. Amalgamated Life Insurance Company, which is based in New York, is considered an essential business and therefore is not subject to these temporary restrictions.

However, in an effort to protect the health and safety of our employees, their families and communities, we have taken a series of company-wide actions, across all Amalgamated Family of Companies locations, to implement work from home and other flexible arrangements where feasible. Despite these changes, we will continue to provide you and your members with the customer service levels you have come to expect from us prior to the coronavirus outbreak.

We are diligently working with our partners and vendors to utilize our remote capabilities and infrastructure. We are also in constant communication with UPS and the USPS to stay informed of any potential changes in service. For the duration of this state of emergency, Amalgamated Life Insurance Company will comply with any required Notice Obligations by emailing and/or mailing notices to all consumers.

If you have any questions or concerns please reach out to your Amalgamated Family of Companies representative or our customer service center at: 914-367-5000. They are well-prepared to answer your questions and can address your specific needs.